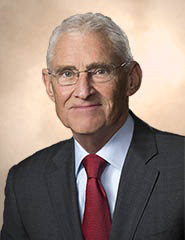 Maurice B. Graham was appointed to the University of Missouri Board of Curators in 2015 by Gov. Jay Nixon.

Graham is president of the law firm of Gray, Ritter & Graham, P.C. and is a past president of the Missouri Bar, the St. Louis Bar Foundation, and the University of Missouri Law School Foundation. He has served as a member and chairman of the Supreme Court Advisory Committee, which oversees attorney discipline in Missouri.