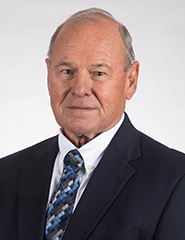 Greg E. Hoberock was appointed to the University of Missouri Board of Curators in 2020 by Gov. Michael L. Parson.

Hoberock is the founder of hth Companies, Inc., which began doing business in March of 1984. He began as the General Manager and under his leadership, the company grew to a workforce of 650+ employees doing business in 16 states. Greg served in numerous roles for Associated Builders and Contractors (ABC), including Heart of America Chapter Chair and 2013 ABC National Chair.

Hoberock is a 1976 graduate of the University of Missouri-Columbia with a Bachelor of Science in Biochemistry.  Hoberock is active in the Washington, Missouri local community. He is a member of the Lions Club, Washington Area Chamber of Commerce and St Gertrude’s Parish. Hoberock previously served on the Washington School District Foundation Board, Washington Town and Country Fair Board and on the Board of Regents at State Technical School of Missouri.