The road to becoming a fully fledged public research university was not an easy one for the University of Missouri-St. Louis, which established its roots with just one building and about 500 students. Wayne Goode, an MU alumnus from Normandy, is one of the leaders whose commitment and perseverance was critical in helping UMSL to take root and grow to its current size, with nearly 100,000 alumni around the world.

In the middle of the 20th century, St. Louis was transforming and more people were moving to the area. However, at that time, St. Louis was the largest city in the country without a public four-year university. Local leaders recognized the need for an affordable option in higher education.

In St. Louis County, a group of Normandy school board members and other citizens, popularly known as "The Committee of 28", under the leadership of Normandy School Superintendent Ward Barnes, wanted to establish a junior college. They saw an opportunity when the Bellerive Country Club listed its clubhouse and 125-acre grounds for $1.3 million. The price was prohibitively high, but the Bellerive board was convinced to drop the asking price to only $600,000 if Normandy purchased the property for the purpose of establishing an institution of higher education. With a lower price, the school district could now afford the property. The clubhouse was soon remodeled for an eager and rapidly growing student body. 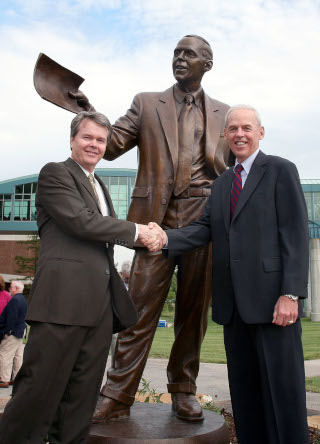 Curator Emeritus Wayne Goode (right) poses with the statue in his likeness on the UMSL campus, alongside sculptor Jay Hall Carpenter (left).

State law mandated that public schools must solicit a competitive bid when selling excess property, but that process appealed to neither the university nor the district. A bidding war would prevent any guarantee that the University would be able to purchase the property. Because of these legal issues, the board and University of Missouri turned to local lawmakers.

Inspired by his parents’ efforts to help obtain land for the Normandy college, Goode, then a first-term state legislator representing the Normandy area, got involved with the project. In 1963, Goode proposed legislation that would change both the St. Louis area and the Missouri higher education system. This legislation, House Bill 153, made the property deal legal and allowed the University of Missouri to acquire lands at the old Bellerive site.

Whenever there is within any school district any school property that is not required for the use of the school district and the property could be used for purposes of offering education beyond grade twelve by a public institution of higher education, the board of education is authorized to lease or convey the property to the public institution, and any proceeds derived from a conveyance shall be placed to the credit of the building fund of the district.

His efforts paid off. On September 15, 1963, President Ellis, board president James Finch, Governor Dalton and Ed Monaco formally dedicated the campus as the University of Missouri-St. Louis, or UMSL. But Goode recognizes that his work built on the efforts of others.

“The goal of Elmer Ellis and others was to have a university for young people from families who normally couldn’t afford for them to attend college,” Goode says. “With my position in the Missouri legislature, I wanted to make sure that their goal was funded and that the campus could expand enough to be a research university that contributed to the land-grant mission of the University of Missouri-Columbia.”

Due to his pivotal role in passing Missouri HB 153, Wayne Goode is considered a major figure in establishing UMSL’s place in the UM System. His election to the Missouri House of Representatives in 1962, two years after graduating from MU, was just the start of what became a 42-year political career, during which he reformed the appropriations process and made sure the university system got a fair share of funds. Throughout his career and even after his retirement in 2005, Goode was a champion for the UM System, UMSL and the St. Louis area.

Goode still has strong feelings about the UM System’s role as the only public research institution in Missouri.

“It’s a hard time for higher education right now, because the funding situation is so difficult, even though the research universities have done a great job of getting grants for their research,” he says. “If there’s anything I want for the UM System in the future, it’s for the University’s research mission to be as well-funded as possible.”

In 2009, Gov. Jay Nixon appointed the former senator to the University of Missouri Board of Curators. Goode was also the chair of the Missouri State Capitol Commission and is a member of several other boards, including the Missouri Historical Society and the L-A-D Foundation, the largest private landowner in Missouri.

During his time on the Board of Curators, Goode served on several committees and held many leadership positions, including Board Chair. He has received many awards and recognitions, including the UMSL Chancellor’s Medallion in both 1999 and 2004. His experience in the legislature and vast historical knowledge of the university was considered “invaluable” during his time as curator, and in 2015, he was bestowed the title of “Curator Emeritus” for his dedication and devoted leadership to the university.

Though Wayne Goode has officially retired, he’s still a daily presence in the UM System. At MU, the Senator Wayne Goode, Curator Emeritus, Scholars Program allows high-achieving freshman and first-year students admitted to the MU Honors College to conduct research and attend the university with a $2000 scholarship. In 1993, he was instrumental in establishing the Peter W. and Helen M. Goode Scholarship Fund, in honor of his parents, to support of the Honors College at UMSL. Also, at UMSL, there is a statue of Wayne Goode created by famous sculptor Jay Hall Carpenter. The statue was dedicated in 2006, commemorating Goode's achievements for the University. The UM System continues to pursue the excellence embodied in Goode’s dedication to the University and Missouri.