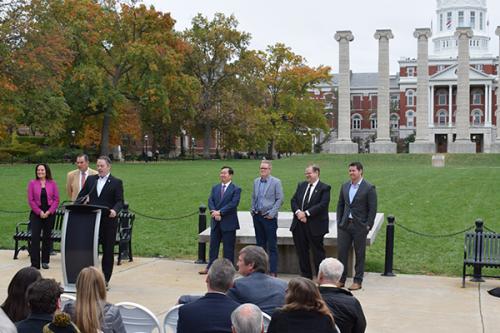 Missouri’s central location and flat terrain allow people to easily move from one part of the country to another, making the state a leader in the transportation industry. In the 1950s, Missouri had a key role in developing the interstate highway system in the United States, and now hopes to host the establishment of Virgin Hyperloop One in the U.S.

In March 2019, House Speaker Elijah Haahr announced the formation of a Blue Ribbon Panel on Hyperloop to develop a plan for the Hyperloop project in Missouri. As a member of the Blue Ribbon Panel, University of Missouri System President Mun Choi, and other state leaders have had essential roles in researching, planning and advocating for the Missouri to be considered for this new technology. As part of this planning, the Panel toured the Hyperloop facility test track in Las Vegas to see the work and technology behind Hyperloop One in action.

On Oct. 28, the Missouri Blue Ribbon Panel on Hyperloop celebrated the next step in the opportunity with the release of its report. The report illustrates how bringing the Hyperloop system to Missouri could help develop the state into a global transportation leader. This report builds on an Oct. 2018 feasibility report by Black & Veatch, which examined the impact that the Hyperloop system would have on the nation, specifically if located in Missouri. The Black & Veatch feasibility report estimated there would be an 80% increase in ridership along the route, as well as 30-minute travel time between Saint Louis and Kansas City, with a stop in Columbia 15 minutes from either city.

The report details the potential impact of the Hyperloop project in Missouri. Notably, the report anticipates that linking Kansas City, Columbia and St. Louis via Hyperloop would create a new economic megaregion ranking among the top 10 in the United States. This development would significantly improve Missouri’s global competitiveness for high quality talent and jobs. By leveraging the UM System’s research capacity and infrastructure, the university would establish itself as a leader in emerging technology fields and help attract students, professors and a highly-skilled workforce to the state. Finally, Missouri farmers and manufacturers would benefit from the new mode of light cargo delivery, which allows their products to reach external markets more quickly and efficiently.

Hyperloop will allow Missouri to take its place as a leader in transportation technology, as well as help the state develop new technologies and innovations. The UM System is committed to using university resources and its statewide reach to help solve the transportation infrastructure challenges of the future. Pursing opportunities like the Hyperloop can bring unimaginable economic opportunities that will advance opportunities for success and well-being for all Missourians.