A Foundation for our University: Daniel Read, President from 1866-1876 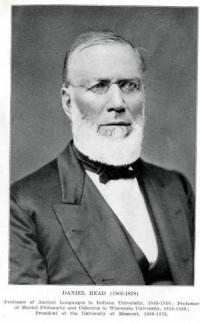 One of our University’s most impactful, and perhaps lesser known, leaders is Daniel Read, president from 1866 to 1876. Throughout his career, Read forcefully advocated for agriculture, applied science, professional schools, teacher training and women’s rights. With a strategic vision and the nerve of a riverboat gambler, Read implemented some of the institution’s most meaningful reforms and built the foundation for the University of Missouri System we know today.

Read came to the University after meaningful service to his alma mater, Ohio University, as well as Indiana University and the University of Wisconsin. Upon his arrival in 1866, Read found that the University of Missouri had been decimated physically and academically by the Civil War. While teaching—but before officially accepting the presidency—Read drafted a report to the Board of Curators setting out his vision for a modern state university. He informed the Board that he would not accept the presidency, but would instead return to Wisconsin if the legislature did not provide adequate resources to support a real state university. The report was shared with the legislature, and Read’s gamble paid off. The legislature agreed to his requests, providing special appropriations and committing to annual appropriations to support the University’s operations for the first time (Viles, 112). Those annual appropriations are still an essential part of the University’s budget.

Read’s presidency also saw the University become a land grant institution. The Morrill Act, designed to furnish land and cash to states to provide working class families with formal education in agriculture, mechanic arts, mining and military tactics, was passed in 1862. The plan to establish a land grant college in Columbia ran into vigorous opposition from those who were unhappy with Boone County for obtaining the site for the University in 1839 and for not adequately supporting the union during the war. Read worked with state senator James Rollins in reaching a “Missouri compromise”: the University would locate the schools of agriculture and mechanic arts in Columbia and the school of mining in the southeastern county offering the most in cash and land, a competition eventually won by Phelps County. With the establishment of the schools in Columbia and Rolla, the University became a land grant university in 1870. One historian describes this “rebirth” second in importance only to the establishment of the University in 1839 (Viles, 125). The University’s land grant mission remains a fundamental tenet that guides our efforts today.

During his tenure, Read called for the establishment of multiple schools for the benefit of the state and for those interested in a University education. First, he insisted on establishing a normal school to provide for the training of teachers and the formal education of women, two causes for which he was a constant champion. Prior to Read’s arrival to the University, women had been excluded from attendance. In advocating for the normal school and the admission of women students, Read emphasized the University must be for all people, since “there is neither reason nor justice in excluding one half our population” (Viles, 140). Read’s sensitivity to opportunities for women may have been influenced by his sister, who was the head of one of the female seminaries (Siebenaler), popular in the nineteenth century when opportunities in educational institutions for women were scarce. After Read’s establishment of the normal school, gradually, the University opened enrollment to women without restriction. The normal schools of Read’s tenure are today’s highly ranked Schools of Education; and women undergraduate students, excluded from the University until Read’s presidency, now outnumber male students.

Read also called for the establishment of professional schools. He proposed establishing a school of law at a time when there were only three such schools west of the Alleghenies and none in the state of Missouri (Stephens, 232-33). Thanks to his efforts, the school opened in 1872. A school of medicine also was proposed and approved during Read’s tenure, in 1873.

Read proposed a ranking system for faculty similar to Cornell and advocated for the protection of faculty through tenure while recognizing “the responsibility of dismissing the inefficient” (Viles, 149). He also emphasized flexibility in student curriculum and, following Harvard’s lead, proposed that students be allowed to take elective courses after their sophomore year so the University “may be best adapted to the educational wants of the State” (Viles, 141). His insight regarding the academic needs of a state university remain important parts of our institution today.

In 1870, Read and the Board of Curators formed a committee to revise and reorganize the University. Many of the recommendations in the “Reorganization and Enlargement of the University of the State of Missouri” were similar to Read’s prior recommendations. Perhaps more interesting than the actual recommendations are the report’s commentary and conclusion. In typical Read fashion, they are practical and strategic, yet aspirational:

“We are to organize our University upon the very idea that the liberal and practical can go together….[W]e are not for the moment to think of severing learning and science from their applications and true end – to promote human good….The University is to be framed upon the very idea of usefulness to the State.” (Viles, 141)

“In conclusion the committee declares its purpose has been to lay the foundations of a great university and to ‘strive to make it what the state requires – the University of the State of Missouri –’ and as such to take its place with Michigan and Cornell, with Cambridge, Yale or Columbia. It is hoped that ‘an atmosphere of universal culture is created – a tone favorable to thought and investigation, and unfriendly to narrowness, pedantry, bigotry and intolerance.’ ‘Let us, as Curators of the University, understand the great opportunity. Let us use wisely and well the resources which we have, and boldly call on the state for what is lacking.’” (Viles, 152)

The report served as the University’s guidepost for decades and its sentiments still echo through our current mission and vision.

University protections contained in Missouri’s constitution still benefit our institution today and probably are attributable to Read’s vision, if not his direct efforts. While Read was president, delegates to Missouri’s 1875 constitutional convention adopted two provisions regarding “the State University.” In what had to be a related to Read’s successful effort to gain annual state appropriations a few years earlier, one constitutional provision required the General Assembly to “aid and maintain the State University, now established, with its present departments.” The other provision vested the government of the University in the Board of Curators. This provision was an attempt by the convention delegates to isolate the University from what they called “the whirlpool and excitement of politics” and the “destroying influence of partisan politics” (Debates of Constitutional Convention of 1875, 34). Both provisions were approved by voters of Missouri in 1875 and 1945 and remain part of the current constitution.

In Read’s last full report to the Board in December 1875, he reviewed the progress and expansion of the University since he arrived in 1866. Just as important as the litany of achievements was his stark warning “against sectarianism, partisanship, and sectionalism. ‘When any sect seizes upon a state university to hold it for their benefit, it is robbery; when a party does so, it is the perversion of a sacred trust; when sectionalism attempts to narrow down the university founded by national bounty to its miserable standard it is a crime against its very foundation – it is treason against every true idea of a university’” (Stephens, 255).

Read’s contributions to higher education extend beyond our institution and state. He was a well-regarded professor of classics and eventually vice-president at Ohio University, his alma mater. He was a professor of ancient languages at Indiana University where he is credited with “saving” the university by attending a state constitutional convention and successfully opposing efforts to divert land that had been designated for the university (Siebenaler). After Indiana, Read was the Chair of Mental Philosophy, Logic, Rhetoric and English Literature at the University of Wisconsin. Despite not being well-known today, Read’s contributions have resulted in buildings being named after him at three universities -- Ohio, Indiana and MU.

Read’s family was marked by both success and tragedy. He and his wife Alice had two children: A son, Theodore, rose to the level of Brigadier General in the union army and was killed at Appomattox in 1865 while a daughter, Agnes, died after years of poor health in 1866. While Read’s sister lived long enough to further educational opportunities for women through her seminary work, the war claimed the lives of two of his brothers. Alice died in the president’s residence in 1874 while Read was president of the University, and Read himself died in 1878, two years after stepping down from his role as president.

Today’s University of Missouri is a land grant university, a place of higher learning accessible regardless of a person’s class or gender, supported by and responsive to the State of Missouri and governed by a constitutionally empowered governing Board. These characteristics can be directly attributed to Read who, with his vision, planning and skill for gaining consensus, reconnoitered a new path for our University. We continue to appreciate Read’s efforts as we walk our own bold and transformative path, strengthened by the positive trajectory set for our University during his presidency over 150 years ago.

Frank Stephens, “History of the University of Missouri” (1962)

James and Vera Olson, “The University of Missouri, An Illustrated History” (1988)

State Historical Society of Missouri, “Debates of the Missouri Constitutional Convention of 1875” (1942)