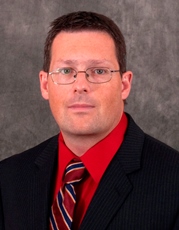 Assistant Professor of Chemistry
Missouri University of Science and Technology

Dr. Richard Dawes, an assistant professor of chemistry at Missouri S&T, has the scholastic reputation of a seasoned researcher in his field. An internationally known scholar, Dawes works in a theoretical field of chemistry that is concerned with molecular structures and reactivity, which affects factors like the efficiency of combustion engines and air pollution.

Dawes has received an impressive amount of external grant funding, especially for a theoretical chemist. He has secured over $1.1 million for research from federally funded programs, including the National Science Foundation. He was also the recipient of the very competitive and highly selective 2013 Early Career Award from the U.S. Department of Energy; the first scientist in Missouri to do so. Dawes’ achievements in these areas are helping establish Missouri S&T in the field of computational chemistry.

Dawes’ research has been exceptionally well received by the academic community. Since joining Missouri S&T three years ago, he has published 26 peer-reviewed papers, one of which was the second most cited paper in the Journal of Chemical Physics in 2012. Dawes also speaks regularly at scientific workshops on the atmospheric dynamics of ozone.

As a teacher, mentor and faculty member, Dawes contributes significantly to the Missouri S&T campus. He teaches four different courses, has earned a perfect 4.0 teaching evaluation twice, and was named the recipient of the Wilbur Tappmeyer Excellence in Undergraduate Teaching Award in 2013. Additionally, Dawes oversees undergraduate, graduate and doctoral student research and serves on several faculty committees for the university.

“I consider Dr. Dawes a most remarkable academic citizen, an outstanding teacher, and a top internationally renowned researcher,” wrote one nominator. “While these attributes are most often only used for older, well-situated researchers, I believe that Richard Dawes has already reached this prominent status within the short time of his university career.”