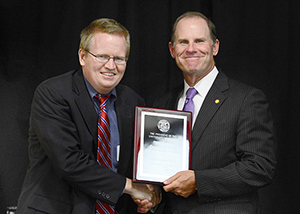 Associate Professor of Physics and Biochemistry
University of Missouri-Columbia

Dr. Gavin McLean King joined the MU faculty in 2009 and quickly became an international leader in the field of single molecule biophysics, a field that explores how individual protein molecules behave on the surface of the cells they inhabit. These behaviors create channels that let substances such as pharmaceuticals pass in and out through the membranes that hold cells together.

King’s laboratory is equipped with a self-modified atomic force microscope (AFM) unlike any in the world. Building on prior AFM technology, he developed a second generation, optically-stabilized AFM that creates threedimensional imaging. As a result of his creation of the world’s first 3-D AFM, he was awarded a 2014 Innovation Award by the Microscopy Society of America.

“Dr. King has established a robust and dynamic research program which is evidenced by his peer-reviewed publications, his external funding, interdisciplinary collaborations, patent applications and recent recognition for innovation from the microscopy community,” wrote one nominator.

At MU, King’s research has been supported by six grants, totaling more than $1.1 million in research funding. He is a recipient of the National Science Foundation CAREER Award and of the Burroughs Wellcome Fund Career Award at the Scientific Interface. He has also been issued seven U.S. patents.

“Dr. King is an innovative and creative young scientist who, at this early stage of his career, has already made important contributions to expanding the ability of interdisciplinary work combining physics and biology to investigate the molecules of life,” another nominator wrote.

Outside of the lab, King has collaborated with MU faculty from the physics, education and biochemistry departments on a week-long summer camp program, “Biophysics and Your Body,” for middle school students. The camp’s curriculum has been turned into a series of five lesson plans that teachers can incorporate into their classes. King also co-chaired a program that offers instruction to scientists on how to better engage the public about the research they conduct.