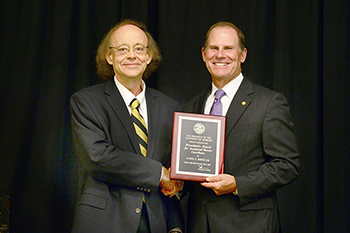 Dr. James A. Birchler, who joined the faculty at MU in 1991, is internationally recognized for his studies in maize and Drosophila (fruit fly) genetics. Together with Reiner Veitia, he formulated the gene balance hypothesis, which synthesizes how regulatory mechanisms affect quantitative traits, dosage compensation, and certain evolutionary processes involving gene copy numbers.

The National Academy of Inventors recently elected Birchler as a fellow for his development of the first engineered synthetic plant chromosome as well as a method for visualizing chromosomes in plants — inventions that have a broad scientific and industrial application and sustained impact. In addition, he is a member of the National Academy of Sciences and a fellow of the American Association for the Advancement of Science.

“Jim has brought to light phenomenon after phenomenon, raising ideas and providing answers years before the rest of us even knew that there was a question to ask,” wrote one nominator. “He is also one of those very rare scientists who conducts cutting-edge research in both the plant and animal worlds, achieving international levels of recognition and respect in both.”

Since his arrival at MU, Birchler has garnered more than $13.5 million in research grants, authored or co-authored over 135 scientific publications, written 128 invited reviews and chapters, and supervised 35 post-doctoral fellows in his lab. He has held membership on 18 editorial boards for national and international journals, including current service as associate editor of both GENETICS and G3, two of the top peer-reviewed genetics journals.

“Jim shows no signs of letting up in terms of his productivity,” wrote another nominator. “He continues to surge forward and still do an amazing job in research and teaching. He truly is passionate about what he does and so one can imagine Jim sustaining his research excellence for many years.”