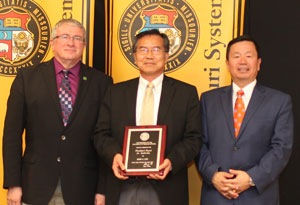 Professor or Mechanical Engineering
Missouri University of Science and Technology

“Dr. Leu’s contributions go way beyond the tremendous accomplishments in his leadership and scholarship,” Missouri S&T Vice Provost for Research Krishna Krishnamurthy wrote in his nomination letter. “He leads by example and his passion and tireless efforts to make a difference are clearly demonstrated in his role as the director of two research centers, ISC and CAMT, that are advancing engineering science and solving significant real world problems as well as fostering collaboration among faculty from a number of departments.”

The Center for Aerospace Manufacturing Technology (CAMT) as well as the Intelligent Systems Center (ISC) accelerate the research, development and transfer of advanced manufacturing technologies to the U.S. aerospace supply chain. Under Leu’s leadership, the ISC has one of the highest returns-on-investment of any center at S&T averaging approximately 12 externally sponsored grant dollars for every internally invested dollar.

“I believe the hallmark of Ming’s career has not only been consistent funding, scholarly production and graduate student mentoring but his desire to include others in his success,” wrote James Drallmeier, Curators’ Distinguished Teaching Professor. “The leadership he has shown in his research centers has created a cooperative and productive environment among faculty across the campus and encouraged several industries to come partners in growth.”

Throughout his career, Leu has supported 40 junior faculty members and post-docs through collaborative projects and team proposals and has mentored 26 Ph.D. students and more than 90 masters students through to graduation.

“Few faculty on this campus have had as much impact on the development of young researchers as Ming. As an example, Ming handed over the reins of CAMT to an eager, high-performing, associate professor in 2015,” wrote Drallmeier. “To relinquish the directorship of the robust consortium that he created clearly illustrates Ming’s leadership and attentiveness to the growth of others.”

“Dr. Leu clearly stands out as a leader in the field of advanced manufacturing technologies as proven by his extensive collaborative research work with industry, as wells as being selected to lead Missouri S&T’s Advanced Manufacturing Best-in-Class strategic hiring initiative,” wrote nominator Kamal Khayat, director of the Center for Infrastructure Engineering Studies. “This is an area of vital importance to our nation’s manufacturing competitiveness and Ming has made great strides to further the state-of-the-art in this field.”