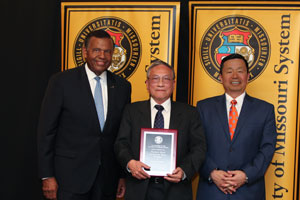 Dr. Wai-Yim Ching began teaching at UMKC as an assistant professor of physics in 1978. He quickly rose to a tenured associate professor in 1981 and a full professor in 1984. In 1988, he was named to his current role as a Curators’ Distinguished Professor of Physics.

“Professor Ching has served of the university and the physics department 38 years and has truly sustained excellence as a researcher and teacher,” nominators Fred Leibsle and Robert Riggs, both from the department of physics, wrote. “Dr. Ching has published refereed publications that are well-received within the scientific community and have been published in top journals in his field. Forty of those publications have been within the last five years, indicating that Dr. Ching is not slowing down.”

Ching’s research and publications cover diverse disciplines, such as condensed matter physics, ceramics and glasses, chemistry, biology, material science, engineering, medical science, geophysics and earth science. He was one of the most cited physicists in the world from 1981 to 1997, with more 2,000 citations of 171 papers. To date, his published research has been cited more than 16,400 times.

“Wai-Yim is almost consumed by physics research, typically working seven days a week. In those rare years when he takes a family vacation, he spends much of his time expanding his knowledge of the literature, while continuing to lead his research group remotely,” wrote Associate Dean Michael Kruger.

With just 10 professors, the UMKC Department of Physics and Astronomy has obtained more than $2.7 million in external funding, well above national averages. Colleagues credit Ching for much of that success.