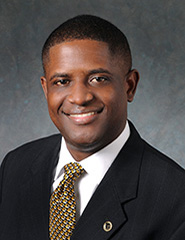 Michael A. Williams was appointed to the University of Missouri Board of Curators in 2019 by Gov. Mike Parson.

Williams is the founding partner of Williams Dirks Dameron LLC where he specializes in Labor & Employment Law, litigating discrimination and retaliation claims on behalf of plaintiffs. Williams is a member of the Missouri Bar, Kansas City Metropolitan Bar Association, American Association for Justice, Missouri Association of Trial Attorneys and National Employment Lawyers Association. In 2004, he became the first African American to serve on the Kansas Bar Association Board of Governors. He also previously served on the Board of Governors for the Young Lawyers Section of the Missouri Bar.

Williams obtained both his bachelor’s degree and juris doctorate from the University of Missouri. Michael has twice returned to the University of Missouri School of Law as an adjunct professor and has received Distinguished Recent Alumni Awards both from the School of Law and the MU College of Arts and Sciences. In 2014, he received the Alumni Award from the University of Missouri. Michael served for over a decade as a mentor and board member for Higher M-PACT, a non-profit group working with at-risk inner-city youth. He has also worked closely with Hope House, the United Way Young Leaders Society, and numerous other civic organizations. The Missouri Bar awarded him the Tom Cochran Community Service Award in 2014.  The Missouri Supreme Court appointed Michael to the Commission on Civil Justice Reform (2018 to present) and the Commission on Racial and Ethnic Fairness (2015 to present).