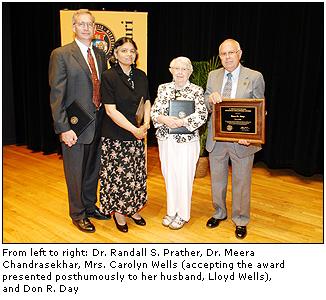 The University of Missouri honored five UM faculty members for excellence in an awards ceremony Thursday evening, May 4, 2006, in the J.C. Penney Conference Center, UM-St. Louis. The ceremony was hosted by UM-St. Louis Chancellor Tom George and his wife, Barbara Harbach.

The Curators' Award for Scholarly Excellence is given annually to the author of the most outstanding book by a faculty member from any one of the four campuses and published by the University of Missouri Press. A subcommittee of the University Press Committee recommends the winner from among all the Press titles by University authors published in a given year.

Lloyd M. Wells (1919–2000) was professor emeritus of political science at the University of Missouri-Columbia.

Wells is being posthumously honored for his book From Anzio to the Alps: An American Soldier’s Story. The work is his firsthand account of World War II, based on a journal he kept during the war, letters he sent home and on personal records and recollections of people and events.

Wells was drafted into the U.S. Army in June 1941, and was commissioned a second lieutenant. He was later promoted to first lieutenant with the First Armored Division. He saw action in North Africa, Italy and Germany, and was awarded the Combat Infantry Badge, the Purple Heart and the Bronze Star.

Wells’ book tells the story of the night of February 21, 1944, when the troops came up to “the caves” at Anzio. He also depicts what happened during the last offensive in Italy and what armored infantry troops on the perimeter of the attack experienced.

The book is not just a battle tale, but also a personal story of how the war transformed young soldiers. One reviewer wrote:  “Here revealed is the humor, the sadness, the terror, and the tender moments of a war which is now remembered first-hand by fewer and fewer participants more than a half-century later.”  Wells also co-authored The Supreme Court and Public Opinion.

The Presidential Award for Research and Creativity recognizes a faculty member with a sustained record of national and international quality research or creativity. A system wide committee of faculty evaluates nominations submitted by the four chancellors.

He also served as a postdoctoral fellow at the University of Wisconsin-Madison.
Prather is considered one of the world’s leading experts in nuclear transfer in pigs. He has been working in this area for more than 15 years with outstanding success, producing applications for medicine and agriculture. He was one of the first to clone pigs from somatic cells and has generated transgenic pigs that will be useful for transplantation.

Prather serves as an associate leader for the Food for the 21st Century Reproductive Biology Cluster and as co-director of the National Swine Research and Resource Center at MU. Among many other honors, he is a recipient of the 2003 Presidential Faculty Entrepreneur of the Year Award and the 2002 Missouri’s Excellence in Life Science Award.

He has had eight patents issued in his name, more than 160 peer reviewed publications, and has helped secure more than $45 million in research funding for the University of Missouri from the National Institutes of Health and the U.S.D.A., as well as from private companies.

According to one nomination, Prather is “truly the embodiment of 21st century biology.” Another writes that his “research is defining the future of his field of investigation, and anything and everything will be possible for him to achieve. As great a scientist as Dr. Prather is, he is an even better person.”

The Presidential Award for Outstanding Teaching recognizes a faculty member for long-term contributions to teaching. A system wide committee of faculty evaluates nominations submitted by the four chancellors.

Since joining MU in 1983, Chandrasekhar has taught undergraduate and graduate courses and served as a graduate advisor. In addition to her devotion to teaching, Chandrasekhar is an optical spectroscopist of international reputation with an outstanding research record.

Chandrasekhar’s interest in expanding the pipeline for women entering the physical sciences motivated her to create programs for K–12 students. She has led the development of four programs, including the Newton Summer Academy, that offer unique opportunities for students to experience the physical sciences through hands-on experiments. Chandrasekhar also works with Missouri science teachers to provide professional development during a summer institute.

Said one nomination letter: “Beyond any doubt, Meera Chandrasekhar has that rare gift of being able to teach well at all levels, and she has put it to most excellent use. As with all truly talented people, watching Meera work makes it look easy.”

This award recognizes a faculty member who personifies the creativity, vision and leadership exhibited by the late Dr. C. Brice Ratchford, president emeritus of the University of Missouri and dean of cooperative extension. Nominations are evaluated by a panel including representatives from the four campuses, off-campus faculty and Missouri citizens.

Day began his Extension career as a farm management specialist in Bates County and then worked in farm management in Osage County. He is a leader in the use of technology in educational programs, partnering with his colleagues on the Columbia campus and in the community to develop the Columbia Online Information Network (COIN), one of the first community-based information networks in the nation.

He also actively partners with others to deliver the Master Gardener program, which, among other projects, brings gardening expertise to juvenile justice facilities, prisons and community centers. In addition, Day coordinates the Master Naturalist program, a cooperative effort between the Missouri Department of Conservation and Extension that works to create a better understanding of the role of natural resources in our daily lives.

He has been recognized statewide in the development and implementation of agriculture engineering programs and curriculum on such topics as energy conservation, residential housing, youth safety, and material handling and processing.

As one of Day’s colleagues wrote: “To many farmers and citizens in central Missouri, Don Day is University of Missouri Extension. You won’t find a better candidate for the Ratchford Award.” Another wrote: “It is impossible to put into words the knowledge and support Don Day has given to agriculture and the community over the years. His dedication is one that is rare and cannot be engrained or learned, but exists in his being.”