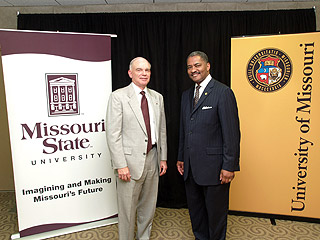 The presidents served as guest speakers at a special joint meeting of Springfield area Rotary Clubs. President Floyd and President Nietzel discussed current and future collaborations between their institutions, their dedication to improving need-based financial aid and assuring access and affordability for students, and shared principles of service by Missouri’s public higher education institutions.

“I am delighted to share the stage in Springfield with President Nietzel to talk with Missourians about how our state’s public higher education institutions are working to assure access, affordability and accountability,” President Floyd said. “Our institutions want to share this positive story at every opportunity, as we collaborate on ways to better serve Missourians.”