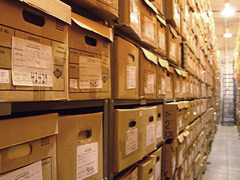 Planning for the four-campus program began in 1963 and became a reality in March of 1964, making it the second oldest University Records Management program in the United States. The program began operation with a Records Manager, Records Center Supervisor, Records Center Clerk and Secretary. The department's first home was in the basement of Columbia Campus's General Service Building. The Records Center was 3,200 square feet with a storage capacity for 6,400 standard-size records center boxes and had a staff of four full-time employees.

In 1970, microfilming equipment was purchased to start an in-house microfilming program. Due to a lack of available space in Columbia, the Records Center was moved to an underground facility in Kansas City in 1975. The space vacated by the Records Center was remodeled and the microfilm staff consolidated form four different locations. By the late 1970's the microfilming service had become the largest University microfilm facility in the country and became the "standard" for others to follow. Microfilm training was provided to many different organizations, including on three separate occasions, employees of the Egyptian Ministry of Foreign Affairs, Cairo, Egypt.

In 1981, the microfilm facility was moved to the University Printing Service Building on 5th Street, followed in 1983 with the move of the Records Center from Kansas City to the Rock Quarry Warehouse in Columbia. The move increased the Records Center storage capacity from 20,000 boxes to 35,000 boxes. By the late 1980's the number of documents filmed by the microfilm facility had reached an annual volume of 8 million source documents images and around 12 million COM images. The staff had grown to 18 full-time and several part-time employees.

To accommodate the continuing need for additional space to store records, the University purchased a building at 2910 LeMone Blvd. and after remodeling, moved both the Records Center and microfilm facility to this building. With the move, the Records Center storage increased to 135,000 and still has room to grow.

The ever-increasing conversion to electronic record applications reduced the amount of paper records being microfilmed and in June 2002, the microfilm facility was closed. In the ensuing 30 plus years, the program has gone through many evolutions. Today, the Records Management program has a staff of 4 full-time employees.

The authority for approving Records Retention Authorizations rests jointly in the following positions:

Upon approval of a Records Retention Authorization by the above group, the authorization becomes official University policy and is to be followed by University employees.